This video slot with 243 pay-lines and five reels was created by Habanero company. The game was inspired by magic, circus and illusionists. It invites you to a circus, where a charming and powerful magician will show you his amazing tricks with rabbits, doves and everything else. He will be standing next to your reels and entertain you while they’re spinning. All the game’s symbols are inspired by magic and illusions, so it creates the proper atmosphere. If you like magic and circus, you’ll surely like this slot. You can give it a try right here for fun mode. But if you want to wager and win some real money, that the real mode in any online casino supported by Habanero is for you.

When you’re ready to play Presto slot for the real money mode, then the first thing you should do is set your bets. The “Bet Level” button will help you to set the desired number of coins for each line that you’re ready to bet. The “Coin” button will help you to adjust the size of your coins. The biggest size is 20 and the smallest is 0.01. If you feel like choosing the highest level of your bets, then push the “Bet Max” button and the reels will set in motion immediately. The “Autoplay” button will allow you to choose the desired number of spins, but if you wish to control each spin of your reels, then choose the “Play” button.

The game is filled with special features and symbols. For example, it has traditional symbols of Scatter and Wild.

The game’s Wild substitutes all the game’s symbols but for the Scatter. What’s more, the Wild can create its own winning combos.

The game’s Scatter looks like a Crystal Ball. Like the Wild, it can create its own winning combinations, consisting of three or more Scatters. Those symbols only appear in the main game. All your Scatter wins will be multiplied by the amount of your total bet. Three or more symbols of this type will give you a reward of 12 additional spins.

When the Bonus feature is triggered, you’ll enjoy such special features as Throwing Cards, Expanding Wilds and Synced Reels.

There’re some feathers on top. They indicate how many spins are left before the triggering of the next illusion. Their number range from 5 to 20. The game can only trigger one illusion at a time, and there’re five illusions in total.

The illusion of Crystal Ball is triggered when you see two Crystal Balls on the first, second, third or fourth reels. Then a random symbol on the fifth reel will turn into a Crystal Ball and then you’ll get your reward. This illusion gives quite a big reward in comparison with all the other illusions.

The illusion of Throwing Cards is triggered when you see several cards (between two and six) on random positions on your reels. They will turn into the game’s Wild symbols and then you’ll get your reward.

The illusion of Synced Reels is triggered anywhere from the second to the fifth reel. Such reels will get locked together and get the similar symbols.

The illusion of Expanding Wilds starts when you see a symbol of a lady. It will expand and cover the whole reel. It means that within this illusion the lady will act as the game’s Wild symbol. 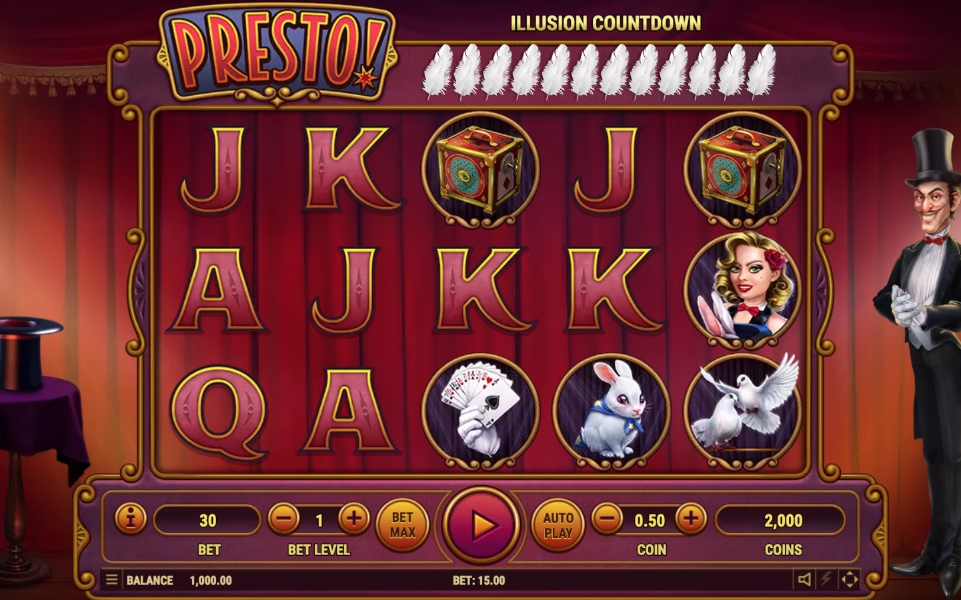 The illusion of Magic Hat will start after a symbol of a hat appears on your reels at a random position. This symbol will trigger a feature of re-spin. What’s more, the hat symbol replicates to the following hat symbol, which triggers the following re-spin in its turn. All the hats symbols, which have already been created, remain in place. When there’re no replicates of Hat symbols, then all the hat symbols, already existing on your reels, will turn into the similar random symbols. They won’t turn into the game’s Wilds or Scatters.

The game is filled with special features, which are illusions. That’s why the game is exciting and entertaining. What’s more, it can give you some great chance for big wins. On the whole, the gameplay is quite pleasant, and its atmosphere is mysterious.