Atmosphere and legends of Ancient Egypt have always been an endless source of inspiration for those, who create movies, games and books. Blaze of Ra from Push Gaming is a good example of the way how gods of Ancient Egypt can turn into symbols of a video slot. This game has 40 pay-lines and five purple reels, set on a grid of 4x5. The background of the game is a desert with pyramids to the right from the game’s reels and Ra to the left. If you are interested in Ancient Egypt and like its mystical legends, you surely should get to know this game better. You can try this game for free right here or try your luck and risk your own money at any online casino powered by Push Gaming.

The first thing you should do when you meet the mighty Ra is to greet him, of course. Then, get down to your settings. Start with range of your betting, because it’s necessary to choose the range, which suits your pocket best. A golden arrow close to “Total Bet” button is for setting your bets between the lowest level of 0.20 and highest one of 100. “Auto Spin” Button can help you to get up from your computer, because it’ll make your reels move as many times as you want them to. But if you’re used to keeping everything under control, your choice is “Spin” button, because only you can push it.

Ra is not only a powerful god of Ancient Egypt. Here he’s also the Wild symbol, which substitutes for all the game’s symbols but for Scatters. Wild symbols form their winning combo when three of them appear on your active pay-lines. A bigger quantity of Wilds is also OK, but three is their minimal necessary number. 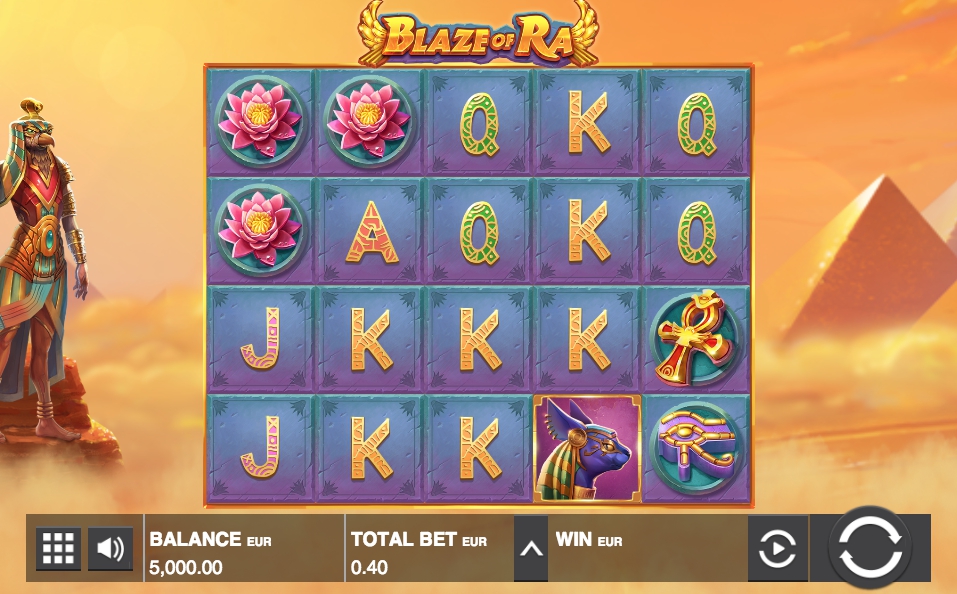 A special feature of Nudging Wilds starts when one or more Wild Ras come on the highest 2 positions of a few reels before you spin them. Those lucky reels won’t spin, but they will suddenly nudge down by two positions, and all the rest of your reels will spin as usual.

Scatter symbol is also close to Ancient Egypt, because it looks like a scarab. If you see three scarabs on your reels (or more scarabs), it means that the special bonus feature will start. Each scarab will give you 1 or 2 spins. Their quantity depends on scarabs’ value.

This bonus feature covers your 1st, 3d and 5th reels with expanded Wild Ras, which will remain on your reels during several spins. If you see one scarab on your reels (or more scarabs), while you are playing that bonus feature, it means that you should expect some additional spins.

Blaze of Ra game is very beautiful and exciting. It offers you several special feature, a special bonus game and a crazy friendship of Ra and scarabs. We hope you’ll love this game, because it’s a real gift for those, who are interested in Ancient Egypt.