Winter seems to be unwilling to walk away, no matter how hard we wish to see the real green spring. Luckily to us, gamblers, tons of new slots are coming this month, so we surely won’t get bored while waiting for all this snow to disappear. Are you ready to indulge into hot lava, Irish legends and retro atmosphere? Well, you’d better be prepared, because right here you’ll learn everything about hottest and newest slots of March, 2018!

A new product from Quickspin is inspired with Polynesian culture. You’ll see roaring flames and enormous wins! You’ve probably heard about Ring of Fire. It’s not only a song of Johnny Cash, but also an area in the Pacific Ocean, where numerous volcanic eruptions and major earthquakes occur. On the whole there are about 400 volcanos in this area! That’s the main source of inspiration for Volcano Riches game. It will invite you to join a mysterious Polynesian tribe and cope with volcanic eruptions. You’ll witness all the major events of the tribe, including traditional dances and enormous totems. What’s more, you’ll meet the goddess of volcanos and fire, named Pele. All the game’s characters are beautifully designed, and the visual effects will only enhance your experience of getting acquainted with Polynesian culture.

The game has five reels and four rows. Its symbols will remind you of fire and volcanos. For example, the Wild symbol can erupt, like a volcano, and add some more Wild symbols in the neighboring positions. The game also offers a special round with Free Spins and an unusual 2-way-pay system, when Pele symbols cover the whole grid.

The game is expected to get available on March, 13th. 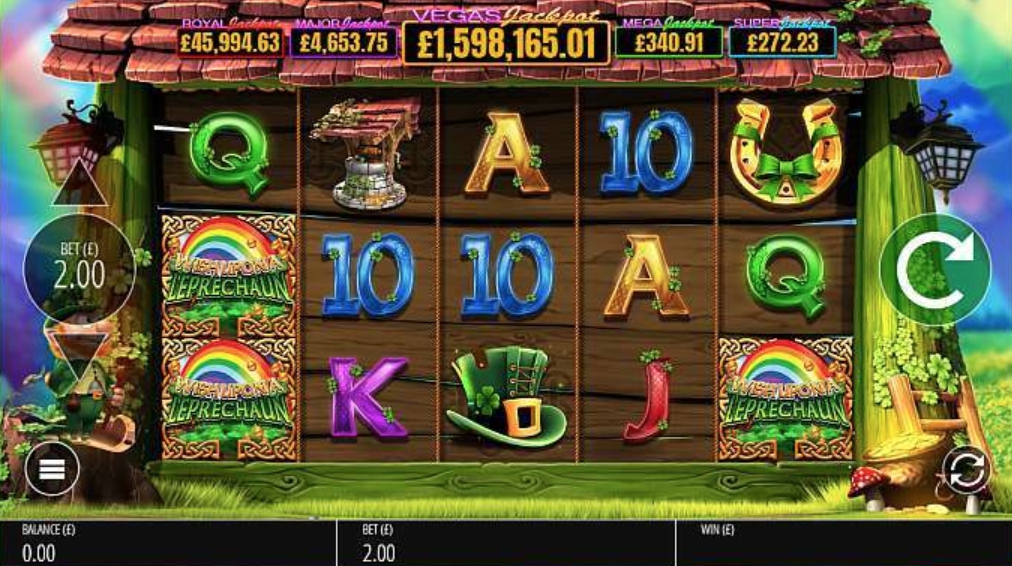 Wish Upon A Leprechaun from Blueprint

Blueprint company has informed about the release of a new slot, entitled Wish Upon A Leprechaun. We can’t say that the game will be just another title in the crowd of games, dedicated to Irish mythology. The game is much more than just that. It’s too beautiful and too exciting. The scenery of the game is a wooden cottage of a little leprechaun. There’s a rainbow above it and a clover field around it. The jolly leprechaun himself will be seen next to the reels and he’ll express his emotions every time you hit some winning combo. The Irish soundtrack makes the atmosphere even more lively. On the whole, the game is so expected because of the two factors. First of all, it’s the beautiful design of the game, and secondly, it’s five unique special features.

The game with five reels and three rows is accomplished by twenty win-lines and numerous special features. Let’s start with the Bonus of Lucky Charms, which has five various modifiers: Colossal Spin, Infectious Wilds, Bonus Boost, They Think it’s all Clover and Spin Streak.

And that’s not all! The game also has a special symbol of a pot of gold. When you see three symbols of this kind, a marvelous bonus round will start. There are four variants of such bonus rounds: Nags to Riches, End of the Rainbow, Chests O’Plenty and Clover Rollover. Each of them has its own unique features.

Now you understand, why we can’t wait this game to get available! 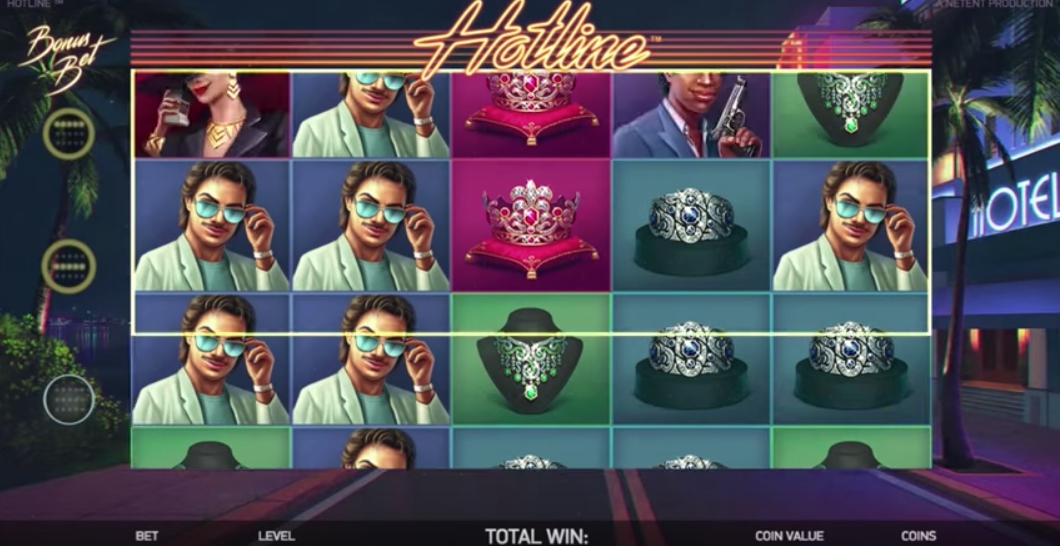 This slot does look good. It’s inspired by Miami Vice, a popular TV show. Since it’s Miami, the game shows us plenty palm trees, colorful sunsets and flashy boulevards. What’s more, the game has two main characters, who are detectives in stylish clothes. Their names are Shades and Baretta.

The slot with five reels and three rows invites you to enjoy its retro-style and marvelous special features. The retro soundtrack will remind you of old years. Audio effects of fast cars and colorful visual animated effects create the realistic atmosphere, which will make you believe, that you really feel the cool breeze from Miami’s beaches.

The slot with retro atmosphere will surprise you with modern special features, including Expanding Wilds, Free Spins, Hotline Bonus and Re-Spins.

The Slot is based on HTML5 format, so it means that it will be available for many various devices, including desktop, smartphones and tablets. The game is expected in the end of March. 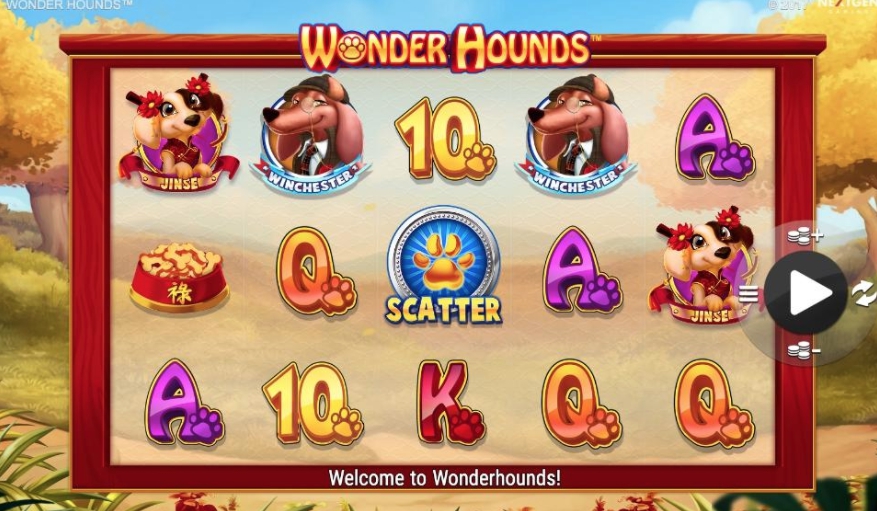 Everyone knows that 2018 is the dog’s year. NextGen company knows that too, so it’s created a game, dedicated to the symbol of the current year. The game is about dogs, to be more exact, about cute hounds in stylish hats. They are called Wonder Hounds and they won’t bark, trying to attract your attention. They are too cool for that.

While playing this game, you’ll surely feel that fun vibe, which NextGen was trying to convey with the help of a cartoonish design. The game with five reels and 25 pay-lines offers you to enjoy its special feature of Free Spins and its Wild symbol. When you trigger the Free Spins round, you’ll be rewarded with 15 free spins together with 15 Sticky Wilds. It’s a profitable deal! And that’s not all. The game also offers a very special feature which will help you to complete many winning combos.

This new game about cute dogs will be available for many devices, including desktops, tablets and smartphones. This game will surely give you much fun and big wins! 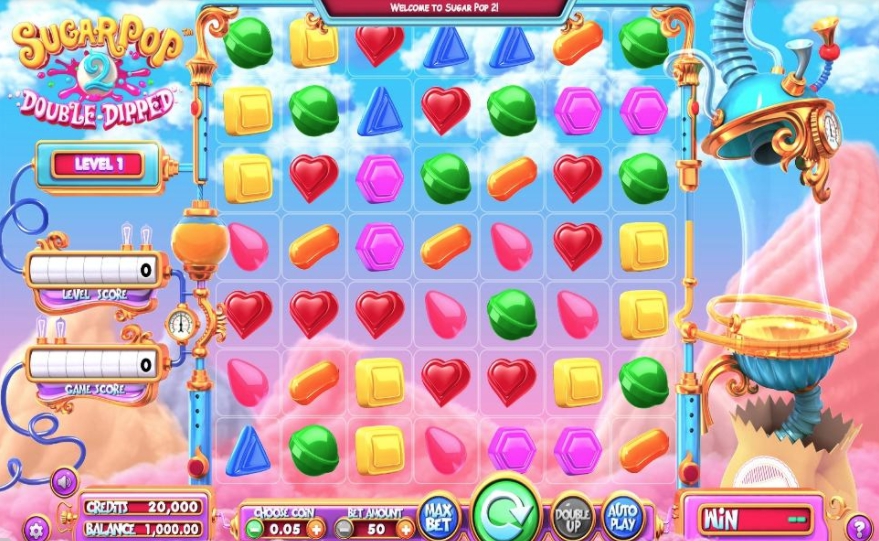 And here’s the last (but not the least) game, which we want to tell you about. It’s a sequel to Sugar Pop, a famous game from BetSoft. All fans of Sugar Pop will be excited to see the sequel, where good old features are combined with something brand new. Sugar Pop 2 shows us tons of candies and everything sweet, like the first game. The design of the game is so sweet, that you’ll believe that you’ve found yourself in a fantasy land.

The sequel will become the Double Dipped version, and it means that the game will become much more interesting and exciting that its predecessor. It will be filled with various special features and symbols, including Sweet Hammer, Wild Candy and Jelly Bean Cannon.

Another reason why the sequel will be much more interesting than Sugar Pop, is the level system. You’ll move up from level to level, and new symbols and features will get unblocked depending on your progress.

We’re pretty sure that now, after reading information about the newest slots, you don’t feel bored anymore. We hope that you can’t wait for new releases, just like us!