The video slot entitled Mild Rockers has 80 pay-lines and five reels. This product of Lightning box inspired with soft and bright atmosphere of rock-n-roll. The somewhat dark design and dark reels make a good contrast with the background, showing as a huge crowd of crazy fans. Everything in the game creates a clear atmosphere of rock-n-roll, including fantastic soundtrack.

Not many slots are dedicated to good old rock-n-roll, so why not give this game a try? You can do it right here, in the free mode, or at any casino, powered by Lightning Box company, in the real money mode.

The first thing you do after stepping onto the stage is making all the necessary adjustments. The “Coin” slider is located next to the main button and used for setting the size of the game’s coins from the lowest level of 0.01 to the highest one of 2.50. The small cogwheel, located in the right corner, can be used for the same goals. The main button is “Play”, it makes your reels move after you’ve done with your settings. The “Cogwheel” button can also be used for starting the “Autoplay”.

All the symbols of the game reflect the wild and mild atmosphere. For example, Singer has turned into Mild Rockers’ Wild symbol. All the game’s symbols (but for the Scatters) are substituted with this Wild. What’s more, this symbol makes nice winning combos through substituting other symbols.

Mild Rockers’ Scatter symbol looks like red lips. These symbols offer you Scatter Encore and special Scatter bonus. If you see three Lips (or more of them) you’ll start the game’s bonus feature, which will award you with eight Free Spins. The Scatter Encore adds another special Encore Spin. 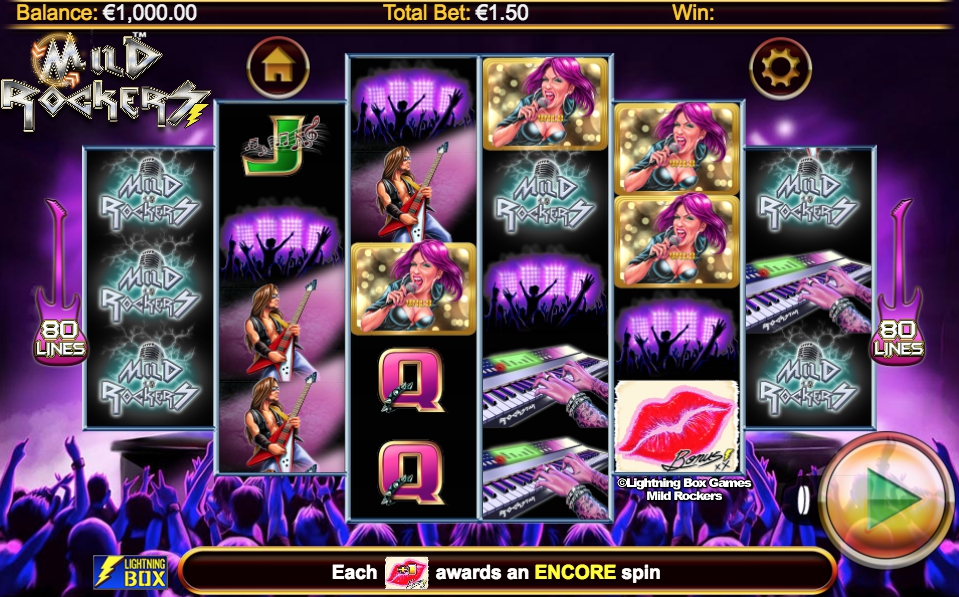 The game is beautiful and stylish. It’ll give you that feeling of good old rock-n-roll, which you’ll surely like. And don’t forget about the magnificent music, which will accompany all of your spins. So, this game is really worth playing.