The video slot with 20 pay-lines and 5 reels is inspired by Nordic mythology, which became greatly popular after “Thor” movies. The game tells us a legend about Loki trickster and other Norse gods. The reels are located against the background depicting the legendary Asgard city. If you’re interested in the Nordic mythology, you surely should get acquainted with this game.

Maybe it’ll become your favorite one. We invite you to enjoy Legend of Loki slot right here for free mode. But if you want to put some money at stake, you should go to any online casino supported by iSoftBet company, which has created this game. The first thing you should do when you’ve found yourself in Asgard city is setting your bets. It’s important to choose the betting range, that will suit you. The “Coin Value” button sets the coin denomination from the lowest level of 0.01 to the highest level of 1. When you’ve done with setting, you’re ready to play. You can push either the “Auto Spin” button, or the “Spin” button. The choice depends upon your decision to spin the reels yourself or watch them spin themselves.

Now let’s take a look at the game’s special symbols and features. Thor’s hammer is the game’s Wild. As any traditional Wild symbol, it can substitute for all the game’s symbols but for the Scatter. It will replace other symbols when it’s necessary to form a winning line. 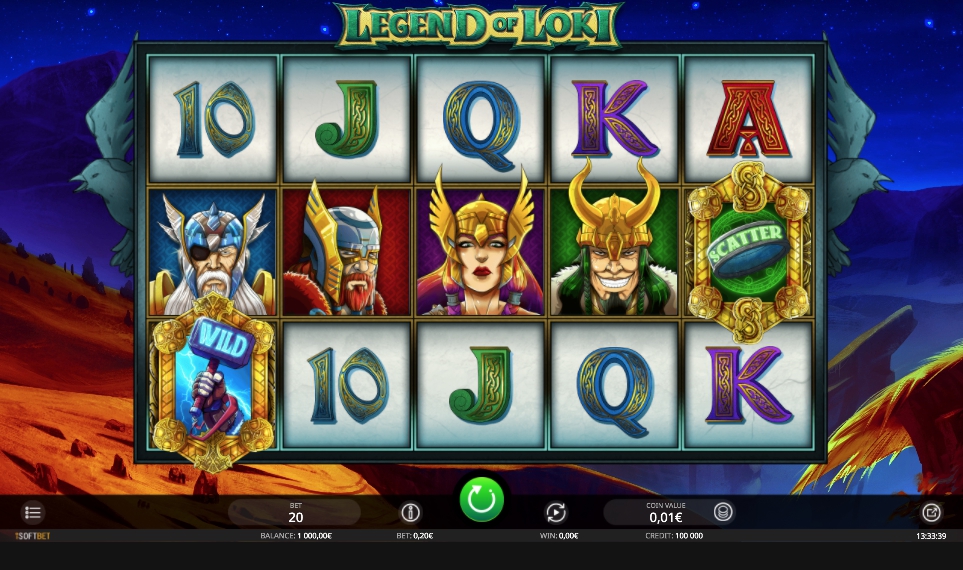 The game has another special feature, called the Wild Strike. It’s random, which means, that it can start on any spin. Loki summons his mysterious scepter and adds some Sticky Wilds for the following spin.

There is a Wild strike feature which is random. Basically, at the start of any spin, Loki can summon his scepter to add a random number of Sticky Wilds for the spin.

After any losing spin, the Storm Shower feature can strike. If it does, it will transform a number of symbols into the same symbol.

Matching symbols on reel 1 will trigger Stacked Re-spins feature. Reel 1 will be sticky and respins will continue if more of the same symbol land in view. Resulting payouts will be made when no more symbols land in the respin end.