«Gladiator Road To Rome From Playtech

A new game from Playtech invites you to visit Eternal City and step into Coliseum, an ancient amphitheater, where brave and strong warriors are trying to kill each other. Playtech will be your guide in this trip back to the past with the help of its new game, entitled Gladiator Road to Rome. It’s the third game in the series about Gladiator. The first one was Gladiator slot and the second one was Gladiator Jackpot. Now we see the game, inspired by a legendary movie directed by Ridley Scott in 2000. We meet the main characters of that movie, including Maximus – a brave warrior, who was turned into a slave and a gladiator. We all remember the story of Maximus and how it ended. If you like the movie and Russell Crowe and if you are interested in the history of ancient Rome, you’ll surely like this slot. We are giving you an amazing chance to learn as much about this game as possible.

The game was released last month, in January. Its reels are located within Coliseum and made of stone. The game’s high-value symbols look like the characters of the movie: Maximus and his antagonist Commodus, Lucilla and Proximo. Any winning combo together with any of these characters will show you the most colorful footage from the original movie. Low-value symbols look like poker cards.

The new product of Playtech has a 5x3 layout with 25 fixed pay-lines. Well, it means that we can’t find anything special in the way this Gladiator game works. You start playing with choosing the most convenient bet value. Then you pick either Auto play mode or Turbo mode. While using the feature of Auto Play you can spin your reels up to 99 times, which will move smoothly, without any interruption. It’s a very comfortable feature, because it will help you to indulge in your game thoroughly.

As far as delicious bonuses are concerned, the new game about Gladiator can be called very rewarding. While you’re playing, you’ll see Gladiator become a Wild symbol anywhere he appears on any reel and covers it totally. Then you’ll be able to complete more and more amazing winning combos, which will bring you bigger and bigger payouts.

Another symbol, which will bring you more chances to win, is the helmet. It will appear on your three central reels (on your 2nd, 3d and 4th reels) and start the Gladiator Bonus, when helmets, made of gold, bronze and silver, will reward you with magnificent prizes. 9 helmets of gold will trigger the unbelievable progressive jackpot, whose amount will rise after every bet of yours.

If you see three Scatters (or more Scatters), Coliseum Free Games will start, where you’ll turn into a real gladiator and have to step onto the arena. But before that you’ll have to choose from a dozen shields in order to find some useful modifiers. They will increase your winning chances while you’re playing the Bonus game. The modifiers include several multipliers, some free games, a special symbol, which will increase the game’s payout, Extra Wild and so on. The special symbol of Gladiator Wild Nudge will make the Gladiator appear on your reels and cover them totally. Then the Gladiator will turn into the game’s Wild symbol.

The new game from Playtech has a huge winning potential, because it offers a nice progressive jackpot. Unlocked Free Spins and several various multipliers will increase your possible wins. The lowest level of the betting range is $0.25 and the highest one is $125. It means that the game invites both whales and beginners.

The game’s RTP is about 95% and it means that it has the medium volatility. The biggest possible payout in the regular game can be 25,000 coins and Free Spins will increase this amount up to 75,000 coins.

At the moment the progressive jackpot is standing at the level of $50,000, but it can get higher and higher. 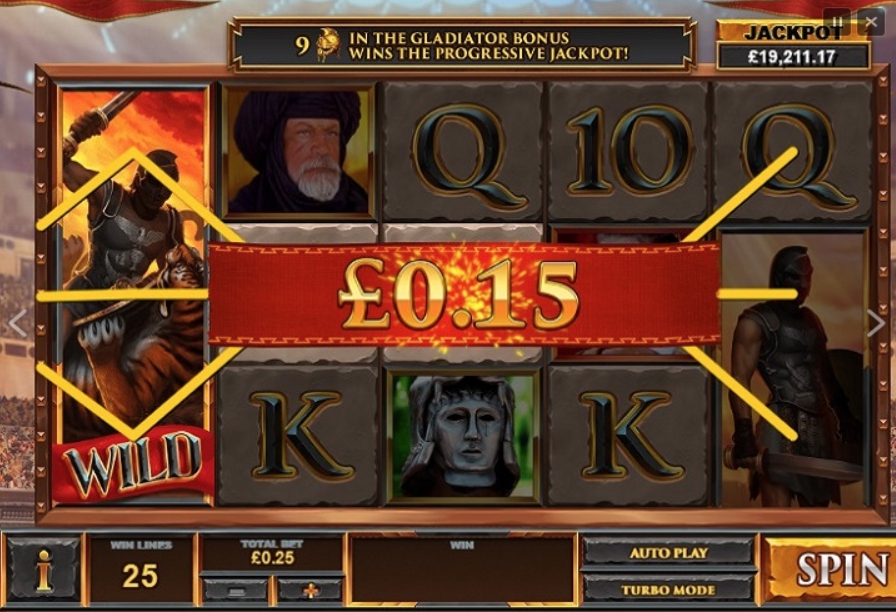 We always love slots, based on movies and historical events. Gladiator Road to Rome game will give you exciting gaming experience, amazing design and delicious special features, including a progressive jackpot. That’s why this masterpiece of Playtech will surely attract thousands of gamblers, who will enjoy regular payouts, Gladiator Bonus or Free Spins.

The Free Spins round is very interesting, because it’s interactive. It means that you can use some modifiers to increase your winning chances.

The only thing we don’t understand in the game is the presence of poker cards, but we don’t have to pay too much attention to them, do we?

The game can be played via a computer, a laptop and numerous mobile devices. So you can take a trip to Ancient Rome no matter where you are.