They say that pirates are the most adventurous people ever populated the Earth. The developers of slot software are aware of that and the genre is blossoming in the field of game industry. Sea storms, the jolly Roger, back patch across the dead eye, bottles of rum, weatherworn sails create the thrilling impression. Nevertheless, muddling through such a wide range of slots, gamblers sometimes have a bit of difficulty to find the best among offerings. Tat is why we are ready to give our hands and show you slots worth playing. Follow our list where we have described the features of well-developed gameplays of new slot sites of the United Kingdom and you will definitely select your future favorite one.

One who have never read the Treasure Island is definitely familiar with main characters of this book. Quickspin offers you to participate in the most thrilling adventures of pirate era. Among the features there are 4 rows and 5 reels along with forty various lines for betting, and an excellent interface is very convenient to use. There are images both of well-known and not that popular pirates in the icons and the most thrilling one is a skeleton. Featuring a wide selection of breathtaking scenes, it provides the gamer with stacked wilds pictured as chests full of treasure things. Three symbols of scatter image can trigger an additional bonus round. Here you should be attentive enough to choose a correct set of symbols to get a reward. Would you like to enjoy the Pirate Attack happening in the course of game? This wild symbol round and the bonus of Island Hop are offered as free spins. 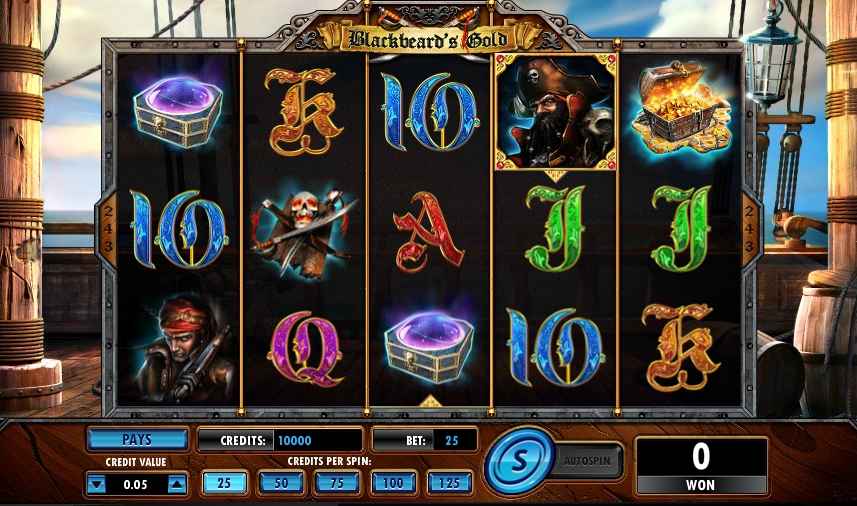 This Amaya slot focuses on the life of Blackbeard, one of the most notorious pirates of all times. No doubt, he is a prolific character in the theme, and his image influences all entertaining features of the game. There are 5 reels and a layout of 3 rows, and, to be precise, it has 243 various methods to win. Besides, the slot includes a couple of featuring rounds. The first and the fifth ones give you a chance to spin Revenge and Victory ships and it triggers an advanced Victory Feature. After that, you will have the opportunity to play a round of free spins and the wild expands randomly on the reels – up to three of them. If the Revenge and Galleon ships respectively, appear on the reels 1 and 5, you will trigger Galleon Feature. You will come across extra wilds appearing for a round of free spins. 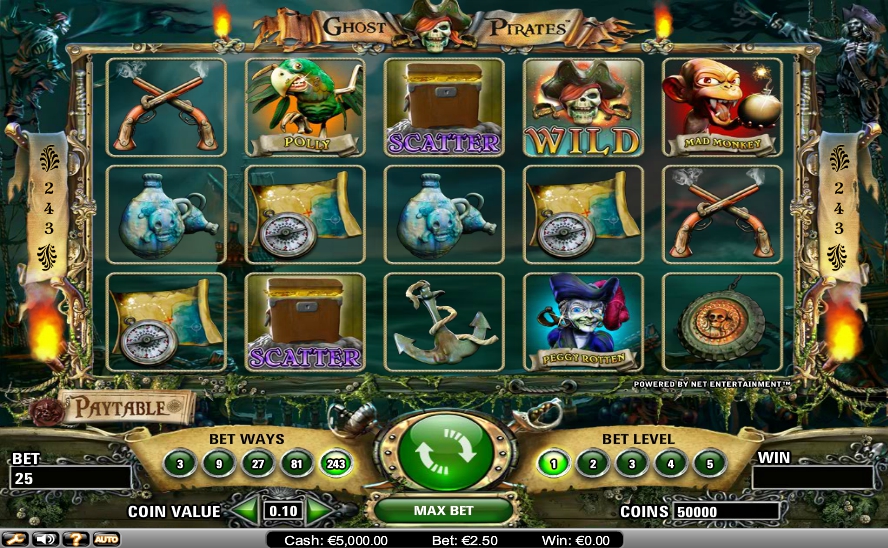 Netent providers cannot be blamed for any slot game presented by them. Their intriguing games are wonderful and they have done their best to create them. Ghost Pirates offers lots of advanced features showing 2 hundred and 43 various methods to win. You will have a chance to deal with different images in the icons of all reels. They will include old cannons, sacred amulets, and maps with hidden treasures. Four symbols of characters are picturing creatures such as Mad Monkey, Polly, Peggy Rotten, and One-eyed Ed. Together with them, you will discover a scatter symbol along with a wild one upon the reels. While playing scatter you will get a chance to play an additional game providing free spins. There are up to 25 of them for you. If you get a combination, which wins, your prize money becomes three times bigger. 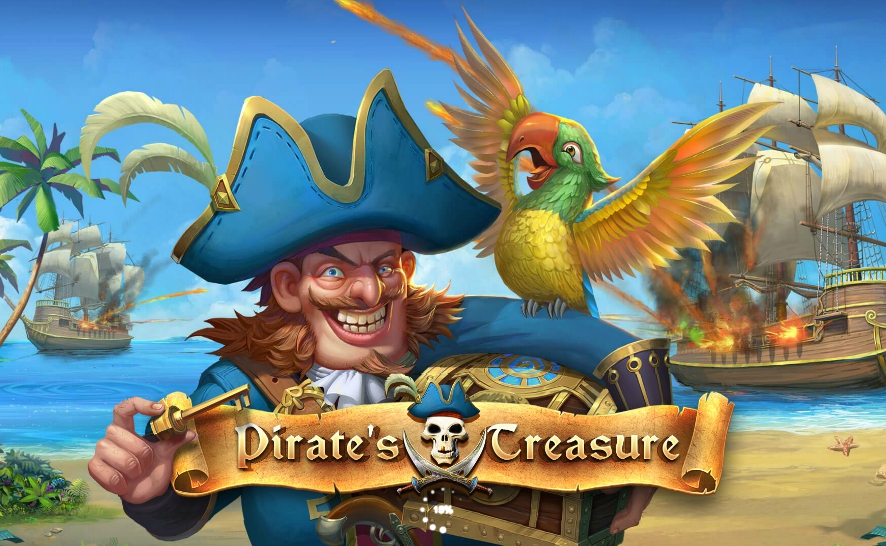 Have you ever been under the sea? Never? In this case, you have to play Pirate’s Treasure. Playson Company will provide you with this gameplay featuring the icons of scary pirates and treasures poisoning people’s souls. You will get a chance to deal with 21 lines for pay, and the max wager will be ?63 for one spin. The image of the chest full of treasure is a scatter symbol, which will give you ten attempts of free spins if three of chests appear in the row. In addition, you are going to come across a wild icon, which symbolizes the captain of pirates, along with the bonus game. When you play free spins, a bonus image appears on the first and fifth reels, the mentioned round gets active. The more ships you shoot, the bigger prizes you get. 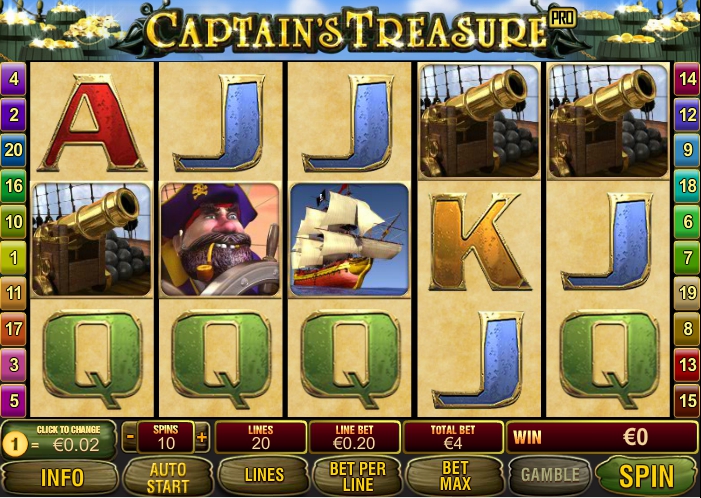 Playtech is a Company developing lovely software for gamers. Captain Treasure Pro is among the things they have created. It is not that complicated as the majority of Company’s games are, but the main charm of this slot is in it entertaining effect. A treasure chest represents both a scatter symbol and a wild one. You can put them for all icon images pictured on the reels. Nevertheless, you can spin 3 spins or more getting a chance to use 10 attempts of free spins. Meanwhile, the round provides the gamers with a mystery scatter. It appears as a regular symbol you can come across in the course of the game. 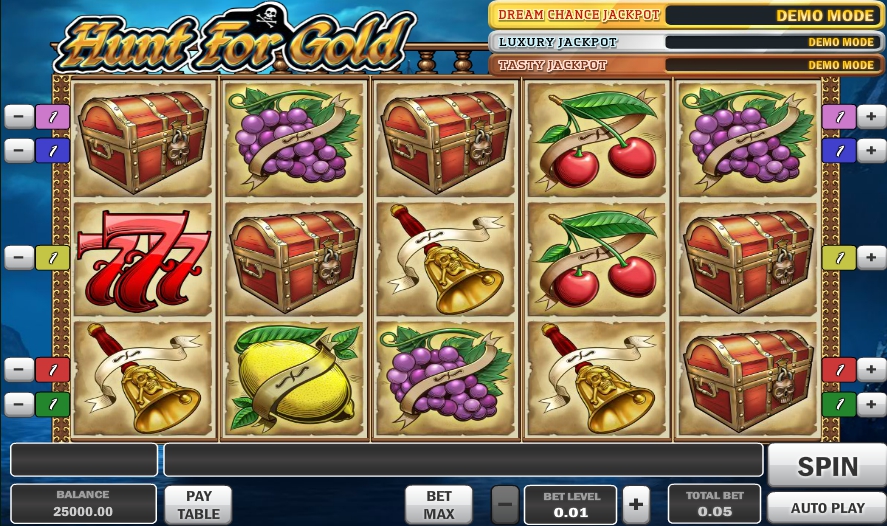 Hunting for gold can get a bit more sophisticated, which attracts the attention of advanced gamblers. Hunt for Gold is one of the slots meeting these requirements. This offering is a kind of more serene ones. Moreover, you have a chance to access a pleasant bonus round named the Dynamite Bonus. It is activated after the appearance of 5 scatters located anywhere in the view. You get from one to four bars of dynamite and you should use the explosive to burst open chests marked on the map. In one of the rounds for advanced gamblers, you can make your winnings 2 or 3 times bigger. Along with that, the game provides you with a scatter in the form of the golden Circle and jackpot wheels (three of them) appear.

Thus, we have revealed that pirates represent an advanced theme to be included in a slot industry. You have read about slot games providing a lot of fun and entertainment. Each gameplay possesses its own specific features, and the variety of them allows you to enjoy your time dedicated to the chosen slot.